From the Archives: What the Maidservant Wore, c1770 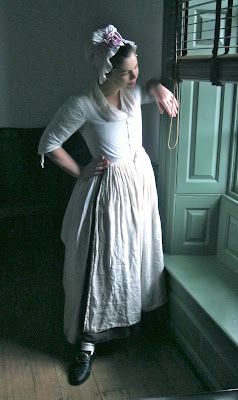 A reader recently left this comment on one of Loretta's posts:  "It is hard to see a woman dressed in some of the outfits of the 18thc or post-1820s doing something as normal as changing a diaper or holding a teething baby. The clothes are for women as objects and not clothes for women who did anything."

I can't answer for the 19thc clothes (I'll leave that for Loretta), but the majority of women in the 18thc did manage to lead active, fashionable lives in the clothing of their times. True, the elaborate dresses worn for court appearances were designed for display rather than practicality, but no one today expects a woman in a $20,000 wedding dress or in haute couture for the red carpet to be tending an infant, either. But the silhouettes and styles created by the very best mantua-makers of the elite class in Georgian times would have gradually filtered down to women of lesser means, who adapted and modified and made the fashions their own. It might have been only a ribbon rosette, or petticoats looped through pocket holes to copy the look of a dress a la polonaise, but fashion was a part of everyday life.

As for the practicality of 18thc clothes: elite women in hoops, stays, and powdered hair danced all night in heeled shoes. They rode to the hunt, made perilous voyages by sea from Europe to America and India, and explored classical ruins. Women wearing stays, ruffled caps, and heels worked in nearly every one of the traditional skilled trades, as blacksmiths, printers, weavers, cooks, bakers, tinsmiths, jewelers, silversmiths, and much more. Women in stays and layers of petticoats followed their soldier-husbands to war, carrying their belongings as they marched behind the army. And while some of these women did have nursery maids (who were also usually wearing those same stays, ruffled caps, and heeled shoes) to help with child-rearing, the majority did not, and did it themselves. 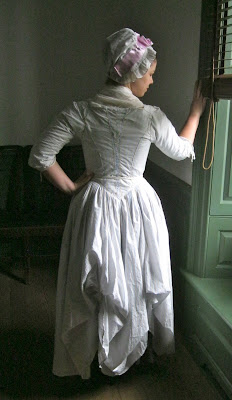 I'll climb down from my soap-box now, and introduce a post from 2012 that echoes these same themes.

We've seen what a stylish British mantua-maker's apprentice might wear in the shop in the 1770s, what a female blacksmith or other laboring woman might wear at her work, and, what, too, a housewife might wear as she went about her day. Now Abby Cox, one of our knowledgable friends from Colonial Williamsburg, shows us what a woman in domestic service might wear. (Her clothes are modern replicas, not 18th c originals, but cut and sewn entirely by hand in true 18th c fashion.)

Uniforms for female servants were a 19th c. innovation. While Georgian-era male servants were often provided with livery, their female counterparts - whether at the top of the servant-ladder as ladies' maids or lowly maids-of-all-work - were expected to provide their own clothing from their meager wages. They were also expected to dress in a manner that was modest, fit for their station, tidy, and clean. Samuel Johnson noted that "women servants. though obliged to be at the expense of the purchasing their own clothes, have much lower wages than men servants, to whom a great proportion of that article is furnished, and when in fact our female house servants work much harder than the male."

Here Abby is wearing an untrimmed English-style gown of a woven striped cotton. The gown has inverted back pleats to shape the waist, and is worn over a plain dark linen petticoat (the under-skirt) and a white linen apron. She has looped her skirts up both to help keep them clean, and to mimic the elaborate skirts of more fashionable gowns - though the effect in the soft cotton fabric lacks the exuberance of poufs of crisp, costly silk. 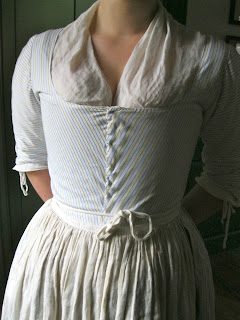 She also wears white thread stockings, low-heeled buckled shoes, and a linen kerchief tucked around her shoulders. Beneath her gown, her figure is shaped by her stays (corset), which every respectable young woman would wear - see here for more about her stays. Her only indulgence is her cap, ruffled white cotton trimmed with a silk ribbon. While Abby's dress is suitable for a servant, it could be equally worn by a young woman working in a tavern or shop, or simply at home.

Like nearly all 18th c women's clothing, regardless of cost, Abby's gown is pinned closed in front (see detail, left). While men's clothing fastened with buttons and ties, women pinned their clothes together with straight pins; the points of the pins were safely buried in the multiple layers of gown and stays. Pinning was not only a neat finish, but also offered an endless, practical range of adjustments to a woman's changing body.