Eighteenth-Century Fashion: A Trio of Petticoats on Display at the Massachusetts Historical Society 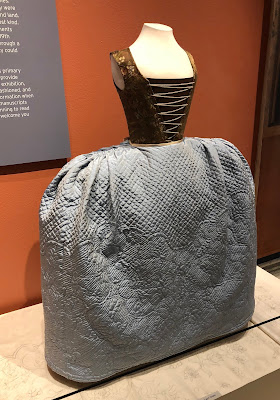 I've already written here about the current exhibition, Fashioning the New England Family,  at Massachusetts Historical Society in Boston, MA. Among the first pieces greeting visitors in the exhibition are a trio of petticoats, each with a different story to tell. (As always, please click on the images to enlarge them.)

Regardless of their status, all 18thc women in New England wore some form of a petticoat: a straight, full garment that covered the lower body and legs, and gathered and tied at the waist. In its most basic form, a petticoat could be made of rough linen, and worn alone like a modern skirt. At the other luxurious extreme, a petticoat could be made of silk and richly embroidered as the lower half of a costly, stylish gown. Some petticoats were also quilted, a welcome layer of warmth against a cold Massachusetts winter as well as another way to display a costly textile and decorative stitching. 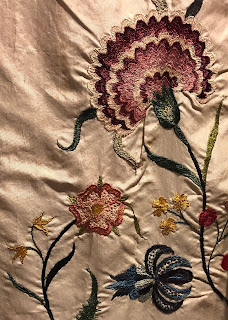 The most elaborate of the petticoats on display was part of a wedding dress, detail right, worn by nineteen-year-old Elizabeth Bull at her marriage to Rev. Roger Price in Boston in 1735. The daughter of a wealthy merchant, Elizabeth had access not only to the celadon silk for the gown, but also both the leisure time to devote to designing and stitching the elaborate motifs and the budget to purchase the imported silk threads used in the embroidery.  I've featured this petticoat and the rest of the dress in three earlier posts here, here, and here, where there are many more photographs. 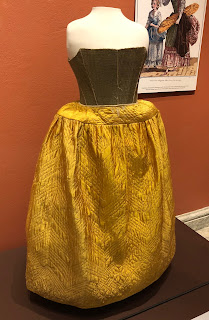 A brilliant yellow silk petticoat, middle left, from the 1750s was worn by Temperance Pickering (1732-1823) of Newington, NH. (The petticoat is displayed with c1780 stays, or corset, made from wool, linen, kidskin, and whalebone.) While the petticoat's maker is today unknown, the bold geometric design of the quilting remains as a testament to her skill. Beneath the yellow silk is an interlining of flax, quilted to the lining of yellow and white checked wool that make the petticoat both elegant and warm. The nearly 300-year-old silk has begun to break down, or shatter, near the waist, detail left, revealing the downy flax interlining.

The third petticoat, upper left and lower right, is a modern reproduction, commissioned by the MHS and beautifully hand-sewn and hand-quilted by our good friends from the Historic Trades program at Colonial Williamsburg: Janea Whitacre, Christina Johnson, Rebecca Starkins, and Sarah Woodyard. (For a brief video about their process, click here.) The petticoat is made of pale blue silk with wool wadding as an interlining and a linen lining.

Yet while new, this petticoat also has a New England history. Family tradition linked the original petticoat to a 17thc Massachusetts ancestor, Hannah Hudson, and was said to have been passed down through her family. The quilting design was traced from this original through a pricked paper pattern in 1896 by a descendent, Alice (Scott) Brown Knight Smith. Sadly the original silk petticoat was destroyed in the fires that followed the San Francisco earthquake of 1906. Realizing the value of the surviving pattern, Mrs. Smith had it transferred to muslin, and then gave it to the MHS. That pattern, lower right, was the one followed by the CW mantua-makers to make their stunning reproduction. (The petticoat is shown with mid-18thc stays, or corset, made of brocaded silk, linen, and leather.) 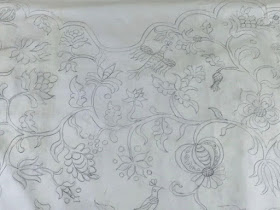 The quilting pattern and the reproduction are typical of wide quilted petticoats worn over hoops in the 1720s-1730s. However, as the exhibition's placard notes:

"Like many stories connected to family relics, Alice Smith's account of the original petticoat proved problematic as we began to examine it in detail. The purported original owner, Hannah Hudson Leverett, died between 1643 and 1646. How then can we explain the fact that, at present, the earliest documented extant petticoats with this type of quilted design in North America date from c1720-1730s, more than seven decades after Hannah's death? This is a mystery that begs to be unraveled - and so our research continues." 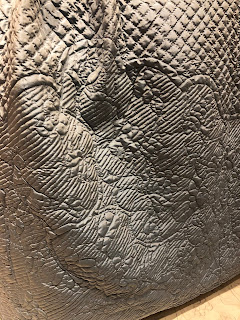 Regardless, the new petticoat not only recreates the one that was lost, but also proves that the tradition of 18thc fine hand stitching demonstrated in the other two original petticoats on display is still continuing today.

Many thanks to Anne Bentley and Kimberly Alexander for giving me a special tour of the exhibition, and for including me in the planning from the earliest stages.

The book that accompanies the exhibition - generously illustrated with many full-color photographs - is being published by the University of Virginia Press. It can be pre-ordered here.