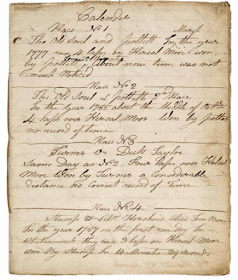 That title got your attention, didn't it?

Auction house listings for old manuscripts are seldom titillating, but when one of the friends of this blog, Mitch Fraas, shared the listing for the "catalogue," left, we knew we had to learn more, because YOU, our faithful readers, would want to know more, too.

The handwritten catalogue is more a record of races held each year on Kersal Moor, Greater Manchester, with dates and times of the winners. The auction house's description is remarkably straightforward:

"Autograph Manuscript, being a catalogue (headed "Calendar") of 35 nude male races held on Kersal Moor between 1777 and 1811....Dating back to at least the middle of the 17th century, the odd custom of naked fell running continued through the middle of the 19th century. According to Lancashire novelist Walter Greenwood, the custom was from the ancient Greek, and "so the lasses can way up form". This small notebook records a series of 35 races between 1777 and 1811, including names of the racers (and nicknames) as well as in most cases, times, distances and amounts wagered, as well as observations on the races. An interesting representation of a strange, but endearing, pastime."

Unfortunately, only one page of the manuscript is shown. From this, however, we can learn that the tersely named Stump (I don't want to guess how he acquired that nickname) ran three laps against Abraham Hershaw alias Tom Born, and won with a time of 14 minutes 29 seconds. He was speedy, that Stump.

But exactly how prevalent was nude racing in England?

In 1787, the Oxford Journal reported on a man named Powel from Birmingham who was attempting to run a mile race in under four minutes. In his trial, "He ran entirely naked, and it is universally believed that he will win the wager."

In the late 19thc., the journal Notes & Queries reminisced about "foot-races by nude men":

"During the summer of 1824, I remember seeing at Whitworth in Lancashire...two races of this description....the runners were six in number, stark naked, the distance being seven miles, or seven times around the moor. There were hundreds, perhaps thousands, of spectators, men and women, and it did not appear to shock them, as being anything out of the ordinary course of things."

In London, however, it did shock at least one indignant spectator, who wrote this 1808 letter in the Morning Post:

"In passing yesterday...through the Ride in Hyde Park, I was much surprised at meeting two men, nearly stark naked, running an arc on the foot promenade; they were attended by a great crowd....This indecent transaction was at a time when the Park was full of people, Ladies and others, and a few minutes before the Princess of Wales passed in her coach. The two racers...were privates in the Life Guards. I mention this with a view that their Commanding Officers may prevent such indecorous scenes for the future, which are liable to occur in the presence of all the Ladies of the Royal Family, and every female whom pleasure or business may induce to ride or walk through Hyde Park."

But not all females were so delicate; some clearly relished the view. Barbara Minshull, a wealthy 65-year-old widow from Manchester, attended the races on Kersal Moor on Whitsun in 1796. She was so taken with the sight of one of the racers, a strapping 6'4" soldier named Roger Aytoun that she proposed marriage on the spot. He accepted (though he was reportedly so drunk at the wedding that he needed to be supported.) Their marriage lasted until her death fourteen years later, while he went on to become a major general and a hero at the Great Siege of Gibraltar.

Eat your heart out, Magic Mike.

The manuscript will be sold at auction by Bonhams on June 7; here's the link if you'd like to make a bid.

Many thanks to Mitch Fraas, Curator at Kislak Center for Special Collections, Rare Books & Manuscripts, University of Pennsylvania, for sharing this first.
Susan Holloway Scott at 12:00 AM