Is This a Forgotten Portrait of Angelica Schuyler Church? 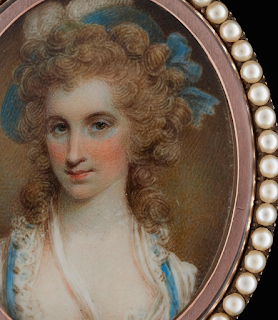 Anyone familiar with the musical Hamilton already knows the name Angelica Schulyer Church (1756-1814). In fact, in most Hamil-fan circles, she's called just Angelica, the Schuyler sister who's famously never satisfied.

Anyone alive in late 18thc London and Paris would have recognized her name, too, for she was certainly the best-known American woman in the fast set of English society. Born into a wealthy Dutch-American family in Albany, NY, she eloped with John Church, a slightly shady Englishman who made his fortune selling arms during the American Revolution. After the war, John took Angelica and their children back to England, where he became a landed gentleman and a member of parliament. Angelica combined  her wit, beauty, and vivacious character with her husband's money to make her drawing room one of THE places to see and be seen in Georgian London. 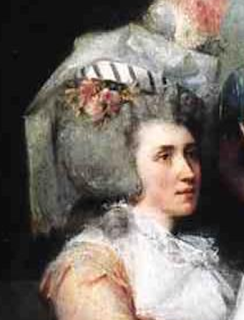 Angelica was admired by gentlemen as diverse as Benjamin Franklin, the Prince of Wales, the Marquis de Lafayette, Whig party leader Charles James Fox and playwright Richard Brinsely Sheridan. She was a patron of artists Benjamin West, John Trumbull, and Maria Cosway. She may (or may not) have had an affair with Thomas Jefferson, and she may (or may not) have had one with her brother-in-law Alexander Hamilton, too.

To me, she's the older sister of Eliza Schuyler Hamilton, the heroine of my new historical novel, I, Eliza Hamilton (to be published by Kensington Books in September, 2017.) I've been wallowing deep in my research of the Schuyler and Hamilton families for a good long time now. Characters become very real to me (especially the ones who were real people - I know, weird writer problems) to the point that I half-expect to run into them at the local grocery.

So imagine my surprise when the lovely face, above left, turned up in my Instagram feed this morning. Posted by the account of the Philip Mould Gallery in London, this portrait is by the well-known Georgian miniature painter Samuel Shelley (1750-1808). Shelley was famous for painting society beauties of the day, and this one - identified only as a portrait of a lady - is a gorgeous example of his work. 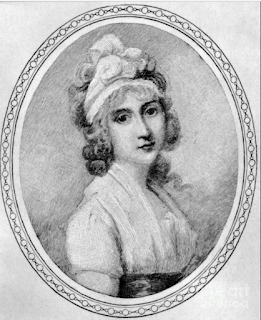 There are only two other portraits of Angelica known today. One is a portrait of her with her son and servant by the American artist John Trumbull, detail, right, and the other a print after a painting by English artist Richard Cosway, lower left. To my eye, the Trumbull and Shelley portraits show the same woman. It's an uncommon face for an 18thc beauty: a long nose (which also turns up in portraits of her father), a small mouth, the dark, slightly close-set eyes. The Shelley miniature also seems to capture both the flirtatious charm and intelligence that Angelica's contemporaries all mention.

From the clothes and hair style, I'd guess that this portrait was painted in the 1780s, the time when Angelica was living in London. The art world in London at the time was a small one; another portraitist, Maria Cosway, was one of Angelica's closest friends, and it's easy to imagine Maria introducing Samuel Shelley to Angelica as a possible patron.

I've written to Emma Rutherford, the consultant specializing in miniatures for Philip Mould with my thoughts. UPDATE: Here's the reply from Ms. Rutherford: "Portrait miniatures do not often survive with the same provenance as oil portraits – their size meant that they could not be physically attached to labels and papers - and they were often not properly listed in inventories etc. I have also checked the RA listings and Shelley does not note exhibiting a portrait of Angelica. There are no other papers or sitters lists which survive relating to his output. With the lack of documentary evidence and provenance we would be unable to say that this is definitively a portrait of Angelica. On the other hand, the facial similarity (including eye colour) is so strong that I would like to amend our cataloguing to say that this is ‘possibly’ a portrait of her."