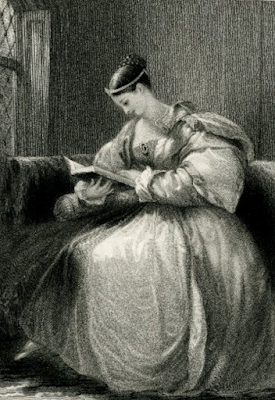 Last week I shared an 18thc warning against women reading romances. By 1860, those who worried about everyone else's reading habits had expanded their concerns, including all novels read not only by women, but by men as well. Apparently novels were dangerous.

The warnings below come from a religious tract published in New York in 1864. A Pastor's Jottings; or, Striking Scenes during a Ministry of Thirty-Five Years was printed anonymously because, as the prefatory note explains, the author "could thus write with more freedom." That same note assures us that "the statements of this volume are all literally true."

Among the many things (this book is nearly 350 pages long) that distress this unknown pastor, novels - that "moral poison" - are right there at the top of the list: "The minds of novel readers are intoxicated, their rest is broken, their health shattered, and their prospect of usefulness blighted."

But he doesn't want us simply to take his word for it. Apparently even novels by Charles Dickens are suspect, and he quotes the famous educator Dr. Thomas Arnold of Rugby School fame to prove it:

Childishness in boys even of good ability seems to be a growing fault; and I do not know what to ascribe it, except to the great number of exciting books of amusement, like Pickwick, Nickleby, Bentley's Magazine, etc...that leave [a boy] totally palled, not only for his regular work, but for literature of all sorts.

Nor are women exempt from the terrible influences of novel-reading. In fact (remember, this is all LITERALLY TRUE), according to the pastor, women suffer even more:

Listen to the evidence given by a physician in Massachusetts: 'I have seen a young lady with her table loaded with volumes of fictitious trash, poring day after day and night after night over highly wrought scenes and skillfully portrayed pictures of romance, until her cheeks grew pale, her eyes became wild and restless, and her mind wandered and was lost – the light of intelligence passed behind a cloud, and her soul was forever benighted. She was insane, incurably insane from reading novels.'

But insanity is only the beginning:

Not very long since, a double suicide was committed...by a young married couple from Ohio, who were clearly proved to be led to ruin and death by these most pernicious books....Police officers too in London and some of our own large cities, have given mournful evidence of the results of some of these novels when dramatized and performed on the stage, as leading to burglaries and murder.

Suicide, madness, burglaries, and murder! As an unrepentant novelist, I clearly have much to answer for. While for obvious reasons, I don't want you to see the error of your ways, but if you'd like to read more of the Unnamed Pastor's edifying work, here's the link to his book, available to read for free via Google Books.

Thanks to Clive Thompson, who shared quotes from A Pastor's Jottings on Twitter.

Above: The Pink Domino; print made by William Henry Mote after Frank Stone, c1833-1835. The British Museum.
Isabella Bradford/Susan Holloway Scott at 8:23 PM