A Rare Wedding Dress for a Highland Bride, c. 1785 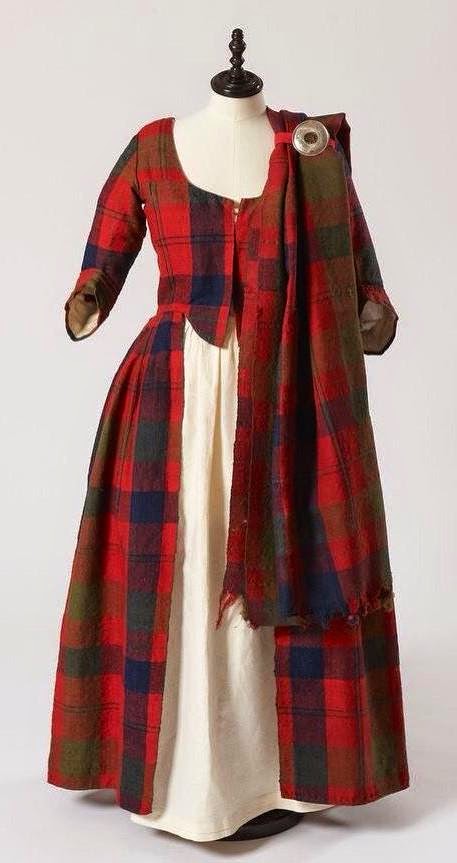 Wedding dresses are always special. Fans of the current miniseries Outlander were eagerly anticipating the wedding dress worn by the heroine, and when it finally appeared, social media was ablaze with reactions. While I'm not about to tackle whether Claire's gorgeous, glittering costume was appropriate either to 18th c. Scotland or to the book (although here's a thoughtful blog post with pictures, defending the costume designer's choices), I decided it's the perfect time to share a wedding dress that was undeniably worn for an 18th c. Fraser wedding in the Highlands.

Alas, I haven't seen this dress in person -  it's in the collection of the Inverness Museum and Art Gallery - so my observations are based on photographs and other sources. The dress was made around 1785 for the wedding of Isabella MacTavish to Malcolm Fraser, both of Stratherrick in the Scottish Highlands. Like the Elizabeth Bull wedding dress that I wrote about earlier this summer (see here and here), this dress has also been worn by successive generations of Fraser brides.

The dress was not made by a skilled mantua-maker. The style is simple, and a little old-fashioned for its time – though apparently there's allowance beneath the back skirts to accommodate a trendy false rump for extra volume. Nor is the stitching the work of a professional, with mismatched plaids and awkward seaming. For more details about the dress's construction, including sketches, see this article by Catharine Niven, curator at Inverness.

What fascinated me was the possibility that this dress, much like the Bull dress, had been made by the bride's family, and perhaps by the bride herself. It's unlikely that any scholar will ever discover the true maker's name, but it's tantalizing to imagine several women collaborating on this single, significant garment.

And it was significant - not only because of its ceremonial purpose, but on account of the fabric from which it was stitched. In this article, scholar Peter Eslea MacDonald notes that while the the dress was made around 1785, the wool plaid is likely much older, from c.1740-1760. Because of the amount of red dye used, this was originally an expensive and much-valued plaid. I've shared a number of 18th c. dresses (here and here) that were remade into new fashions, a thrifty way to recycle a costly fabric. But however beautiful the silks used in those dresses were, this plaid was different.

Traditional tartan plaids represented different clans in the Highlands, and were worn proudly. and rebelliously as well. After the disastrous Jacobite Rising of 1745,  England passed laws designed to further destroy the power of the clans, and to force the Highlanders towards assimilation. As part of the Act of Proscription of 1746, the Dress Act prohibited wearing "highland clothing" such as tartans. The penalties were severe, and included imprisonment and transportation. The forbidden textiles became even more precious, symbolic of all that had been lost, and were carefully hidden away for safe-keeping far from English eyes.

The Dress Act was finally repealed in 1782. This dress was made soon afterwards. The true story of Isabella MacTavish's wedding dress may be lost, but how easy it is to image a grandmother reverently bringing out this MacTavish clan tartan that she'd hidden nearly forty years earlier, and giving it to the bride for her wedding dress – a dress that would have symbolized love, and so much more.

Many thanks to our good friend costume historian Kimberley Alexander for sharing this dress with us. Her blog Silk Damask is one of our favorites!