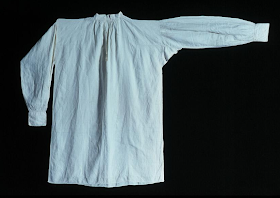 It's a common misconception that all people in the past were dirty and smelled bad. Yes, not everyone in 18th c. London smelled sweet and fresh all the time, but then a ride on any modern subway during a July rush hour proves that modern folks aren't always delightful, either.

By the 18th c., however, most Englishmen of the middle class and above prided themselves on personal cleanliness as a sign of good healthy, respectability, and virtue. While a bath tub was still a luxury, a wash bowl, soap, and water were standard features of nearly every bedchamber.

Even more important to 18th c. notions of cleanliness was clean linen. According to medical beliefs of the time, perspiration was considered one of the body's important ways of "evacuating" ills, and a shirt made of linen, a naturally absorbent fibre, would contribute to good health. Linen shirts were an indispensable part of the male wardrobe and the only garment worn directly against the skin, and having a clean shirt was a literal sign of clean living.

But like many things that begin with good reasons, fashion soon took over. Men were judged not only on the quality and cleanliness of their linen, but also how often they changed those linen shirts. As this passage from Daniel Defoe's The Complete English Tradesman (1728) shows, while cleanliness and clean linen was to be praised, excessive amounts of it weren't – at least not to him.

The universal custom of wearing excessive fine linen; not a shopkeeper, not a drawer at a tavern, not a barber, not hardly a barber's prentice, but must have a shirt of fine holland of five or six shillings per ell; and the ordinary beaus run it up to ten or twelve shillings an ell. Their grandfathers perhaps as clean, though not so gay [fashion-conscious], contented themselves with good holland of less than half the price, and with shifting their linen perhaps twice a week; to correct which, our nicer gentlemen have brought it to two clean shirts a day; we may suppose their uncleaner bodies require it more than those of their ancestors did.

Thanks to Sarah Woodyard, apprentice mantua-maker, Historic Trades Program, Colonial Williamsburg for her assistance with this post.