From the era of Downton Abbey, more from Helen Rowland. 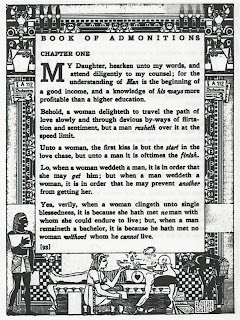 He marryeth a damsel because she appealeth to his "higher nature", and spendeth all the rest of his days seeking after those who appeal to his lower nature.

Behold, an honest woman may cheat at cards, but never at love; but he considereth himself an "honorable man" that never cheateth at a game of poker though he never playeth fair at the game of hearts.

Go to! Think no man in love while he flattereth thee and extolleth all thy ways; but, when he beginneth to moralize and to criticise thy hats, then mayest thou plan thy trousseau.

When he saveth thy life it may be for chivalry's sake; but when he carryeth an umbrella to please thee it is for love's sake.

Be not set up when a man giveth thee the key to his heart, for, peradventure, upon the following day, he may change the lock!

Then, how shall a woman understand a man, since they are all cut upon the bias!

Verily, verily, by turning him around , my Daughter, and reading him backward, even as a Chinese laundry ticket!


The sayings of Mrs. Solomon: being the confessions of the seven hundredth wife as revealed to Helen Rowland, 1913
LorettaChase at 12:30 AM