The Finer Points of an 18th c. Man's Shirt 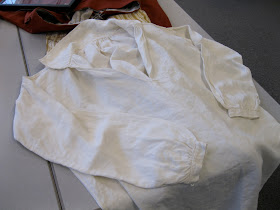 There are few historical garments more misrepresented than an 18th c. man's shirt. For European men from the middle ages into the mid-19th c., the shirt was not only an indispensible piece of clothing; it was a democratic one, too. The shirts worn by George III would have been cut exactly the same as the ones worn by his grooms, as well as by Thomas Jefferson, Beau Brummel, Tom Jones, and Mr. Darcy. You know what they looked like: silky, lace-trimmed shirts cut to open like a modern tux shirt, on everyone from those Founding Fathers in the bank commercials to Fabio.

Uh, no. Eighteenth century men's shirts didn't button down the front, and they never were made of silk. They pulled over the head with an opening slit to about mid-chest, and were fastened with two or three buttons at the throat. Shirts were geometric jigsaw puzzles, an elaborate series of rectangles cut without curved seams and designed not to waste even a scrap of a length of fabric. The sleeves were luxuriously full, 20" wide or more, pleated into dropped shoulders and wrist cuffs. Additional gussets for ease were placed under the arms, on the shoulders, and at the hem-slits. The collar, upper right, was another rectangle, soft and without interlining, whose final shape was determined by the neckcloth, cravat, or stock tied around it. Ruffles could be sewn into the neck slit and on the cuffs.

These shirts were wide, full, and long, reaching to the middle of the thighs. An average 18th c. shirt could be 60'" around the chest and 40" long. While some gentlemen wore under drawers, for most men a shirt was an all-purpose garment, with the long tales drawn between the legs to form underwear. Shirts were also worn for sleeping. As a result, shirts were frequently changed, and a man was judged by the cleanliness of his linen. 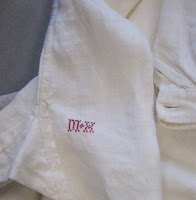 Linen was in fact the standard fabric for men's shirts, ranging from a laborer's shirt of rough Osnaburg to a gentleman's fine bleached Holland (and never, ever silk.) Linen is a fiber both practical and surprisingly sensual. It's springy and long-wearing, easy to launder, and grows softer with wear. It holds the warmth of the skin gently, without becoming sticky or clammy, yet remains cool in the summer. Not only was linen cloth used for the shirt, but linen thread was used to sew it, and the shirt's buttons, lower right, were needle-woven of linen thread, the only kind of button able to withstand 18th c. laundry practices.

Social distinctions showed in a shirt's details. The fine twist of the linen, the purity of the whiteness, the evenness of the stitching and seaming, with a discreet monogram, lower left. embroidered at the hem were all marks of an expensive shirt. How that shirt was washed and pressed denoted a gentleman's rank as well; the dozens of tiny vertical pleats pressed into the wide sleeves required the most accomplished laundresses using specialized irons and a chemist's knowledge of starch for the perfect degree of crispness. Careful pressing was also required to be able to fit all that fabric neatly inside the much narrower sleeves of a coat.

Perhaps there's so much confusion about 18th century shirts because so few of them still exist. While a richly embroidered waistcoat might be worn only for special occasions before being set aside for posterity, utilitarian shirts were worn and mended and refashioned until they were finally worn out, and then sold for scrap to paper makers or used for bandages. This site has links to several 18th-19th c.  shirts that have survived in various collections.

The one shown here is a replica made by tailor Mark Hutter of Colonial Williamsburg. It's truly a beautiful garment, deceptively simple in its style but elegant in its flawless hand-sewing. Fabio, eat your heart out.
Many thanks to Mark Hutter, Neal Hurst, & Karin Larsdatter for assistance with this post.
Isabella Bradford/Susan Holloway Scott at 12:01 AM